"In the dance world, what music and/or movement is appropriate for children?"

I love this question because there are two sides to the argument and they are both wrong. Come at me, Karen.

I have an opinion on this, having pondered the subject as both a dance teacher and as a dance child, and that opinion is that you're all spitting into the wind with these arguments of yours. WAIT! Before you lambast me, I have anecdotal evidence to support my opinion, the weakest kind of evidence there is! (Sarcasm, Karen)

OR, "IF YOU WANT DESSERT, FINISH YOUR PLATO"

First, some back story. I mean waaaaaay back.

As a music student at Columbia College Chicago, my favorite bit of music history was learning about Plato's views on Greek musical modes. A mode of music is a specific arrangement of notes in a scale that elicit an emotional characteristic, like how the minor, or the aeolian mode, sounds sad, or how the mixolydian mode sounds drunk and happy, I mean, Irish. Around 375 BC, the Athenian philosopher, Plato, wrote his Steven King-sized Socratic dialogue titled "The Republic" where he discussed his views on justice, a just society and the humors of mankind, of which music was an important part of all three.

Pretty backward thinking, right? You wouldn't find that kind of thinking in this day and age. Except that you totally do.

At dance competitions, there is that almost insignificant category of "age appropriateness." Usually it's a throwaway category and 5/5s are generally expected. But it turns out that this category is bullshit.

My very first year of setting a tap dance for a competitive team was for the 9-11 year olds. I chose John The Fisherman by Primus, because Honey-Tapper don't give a fuck. If you are not familiar, Primus is a pseudo-metal band with heavy bass-driven riffs, distorted and dissonant guitar licks and a front man who sounds like a cross between a bursting water pipe and a dolphin with a head cold. Also, their rhythms are outstanding, their energy is through the roof and their songs are a lot of fun - you've played the JTF song a million times on Guitar Hero back in the day. I figured this song would stand out among the monotony of overused Red Hot Chili Pepper's/Stevie Wonder's "Higher Ground" and Rednex's "Cotton Eye Joe." Unfortunately, I was right.

For my first piece of choreography ever, scores were decent enough, except for one competition which will remain nameless because I forget the name.

Anyways, there was one judge who tanked our score because he hated the music choice. We received a 0/5 for age appropriateness from this one judge and 2/5s from the other two, which put us in the bronze level. "Oh my GAWD, this music is so terrible," said the 0/5 judge. "I can't concentrate because the music is so bad," "this music is NOT appropriate for children," etc. This went on for the entire 2 minutes and 15 seconds of the critique tape while my kids and I were listening in class. No dance critique other than he couldn't hear the taps on the marley, non-microphoned floor. Go figure. Needless to say I received an earful from parents and administration afterward.

Okay, I can take a critique. Point made.

However, as I was rustling though the critique sheets I stumbled on another of our studio's dances, one that won a top award and received all 5/5s for age appropriateness - Christina Aguilera's "Candyman." Of course you know the song, with such lyrical gems as, "He's a one stop shop, makes the panties drop / Makes my cherry pop", and contains references to drinking alcohol and other less overt innuendos. What seems like a benign lyric, "We shook the paparazzi for a big surprise (a big surprise)," is suspect; as for what the echoed "big surprise" is...it's his dick, ladies and gentlemen. The guy has a giant cock that tastes like it was dipped in sugar, is what the song is implying.

Primus' "John The Fisherman," for all of it's musical dissonance, is about a guy who really wants to go fishing. Not fishing for sweet, sweet dicks, but for fish. That's all.

When I asked the parents and the studio admins about the appropriateness about Candyman, they said, "Oh, I had no idea!" and, "Well, nobody really notices so it's no big deal," and, "It's a fun song. Don't read into it so much."

So you're telling me that an F# played against an Fminor chord is inappropriate for children, but a happy song about gobbling a giant sugar dick is just fine? Well then, fuck me with a giant candy cock, too!

For the record, I don't dislike the Candyman song. It's...fine. I'm just salty that my kids got a bronze because of the stigmatization of musical genres regardless of actual lyrical content.

Also, this proves Plato was right in that the minds of men and women can be ignorant to media content as long as it has a catchy musical hook. Plato wanted certain types of music disallowed for how they made us feel. So did Hitler and Stalin. Now, the Impactful Power-Applause Symposium dance competition is following suit.

OR, "WON'T SOMEBODY PLEASE THINK OF THE CHILDREN"

For my second anecdote I want to, to... HEY, WAKE UP! The history lesson is over, I promise.

For my second anecdote I will take you back again, though this time we will stay in the 20th - 21st century, to the years of 1998-2002 to be exact. I was a young man going through the scourge of puberty and discovering my sexuality, not by sit downs with my parents or through a competent education syllabus at school, but through hearsay and anecdotes from friends - again, the weakest form of evidence. (Not sarcasm, Karen. Try to keep up.)

Around the age of 12, I started to notice something really great at these dance competitions, the costumes. My pubescent mind was captivated by such crowd pleasers as the pleather bikinis, cheetah-skin bikinis, fur-lined bikinis, polka-dot bikinis, and lacy bikinis, just to name a few.

The accompanying routines did not disappoint, either. Every booty-drop, thigh slap to a slow roll up (sometimes with eye stares and finger biting), center splits where dancers bump their crotch up and down a couple times for good measure, the hands-on-your-head and turnaround to shake your butt at the audience, the fist-pumping stick your boobs out, the on-the-floor panther crawl while making eye contact with the judges, the occasional butt-slap, and the classic go into a butt roll and spread those legs right in the middle while facing the audience.

I didn't have to look any of these up, by the way. They are all seared into my pubescent memory, only now the thing that they make rise in me is my lunch.

Does anyone understand what "culture" means? A brief refresher: Culture is, among other things, social institutions agreed upon collectively by a group of people, a nation, or a social group. Here in the good ol' U.S. or A. we have a pretty shitty cultural approach to the human body, one that is met with shame and feelings of taboo. I can not speak for women, but I can speak for men, and what I have to say is not good.

Seeing these routines entranced me and made the hairs on the back of my, well, everything stand on end. As soon as those routines were done I would immediately seek out those dancers, usually while dressed in a bedazzled sailor costume, so you know my game was strong. Did I want to meet them to compliment their technique? No. How about to ask about their favorite dancers? Nope. Inquire about what type of dance shoe they wore? Nuh-uh.

I wanted to meet them because their dancing made them seem mature and ready for smooching, among other things. These girls must "know." They didn't, but I had only seen moves like that in scrambled images on the bootleg Spice Network VHS cassettes, so I had all the evidence I needed.

And truth be told, I did "hook up" with more than a few. Mostly smooching, but some boob-touching as well. Of course, for second base you promise to be their boyfriend, often happening day of. The prospect of finding another girl to cheat with, occasionally also day of, was not out of the realm of possibilities. I was a hyena on the hunt, a scavenger seeking low-hanging fruit. I hurt many feelings and spoiled many "firsts" for many young women.

For a 12-14 year old boy this was heaven. To a now 34 year-old man, this seems like the type of aggressive, predatory behavior that those now-grown women warn their daughters about. To say that these are some of my least proud moments is an understatement. I was gross.

When it comes to the development of young women, many argue that these dance moves are simply body isolation and dance technique, and that they need to learn these moves and have a seductive, sorry, "sassy", stage presence because that is the type of dance jobs that they may want to book as adults. Besides, mothers on Facebook will argue, their daughters are just children and do not yet carry the stigma that these routines convey, that they are just dancing.

That is all true, by the way. These young women mostly don't realize the stigma that their movements carry, but when asking who is affected by them you may be looking at the wrong child. How great would it be to be able to explain to young male dancers the difference between lewd dancing and stylized dancing? The parents aren't going to do it, the schools are bogged in political correctness and the dance teachers won't touch the subject if they want to keep their jobs. Maybe, with the right information, I would STILL have acted like a peach-fuzzed asshole to these girls, but maybe I could have made better decisions had I had all of the info.

But then again, a 13 year old girl humping a floor in a pleather bikini with chain-bracelets and bright red lipstick accenting the shape of her mouth while she licks her lips to "aww, skeet, skeet mutha- *muffled voice edit*...you know, get low!" isn't exactly open to that much interpretation.

"Won't somebody PLEASE think of the children?"

That gets my vote for one of the Top 10 phrases of the 20th century. What began as a phrase to advocate for children's labor rights soon turned into a blanket statement for anything that people deemed immoral (homosexuality, violence, bad haircuts, etc.). It became a way to win arguments by creating an emotional appeal in order to bypass logical reasoning. It started as a plea for civility, became a nanny-shaming movie line, morphed into an adult cartoon parody catch phrase, and ultimately evolved into the highest form of expression, a meme. 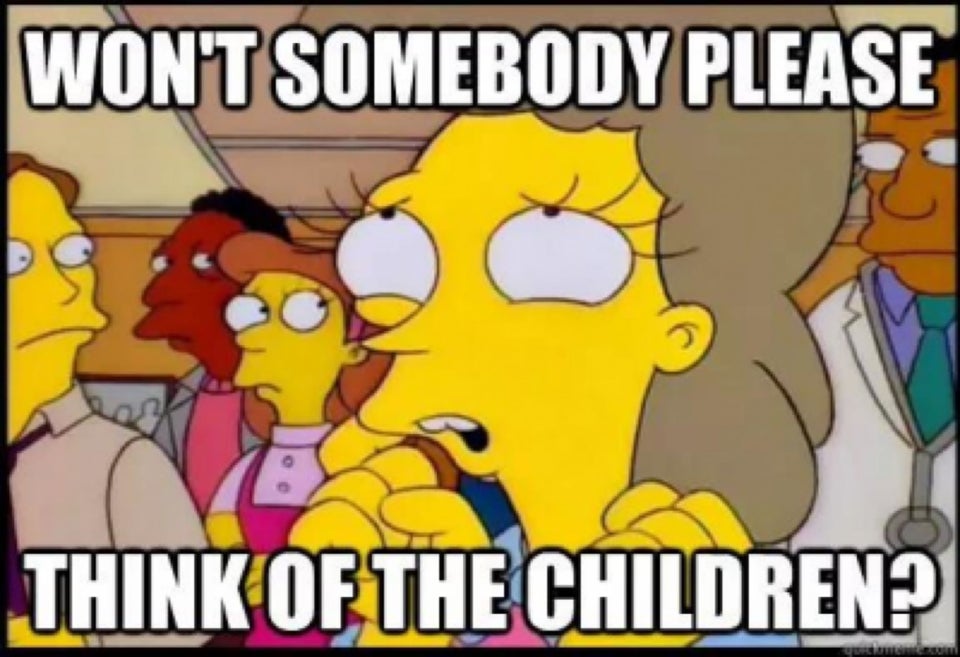 The answer is yes... and no. If you are thinking of the children, then perhaps you should consider the mental state of all of them. If no, perhaps turn your attention towards the culture that you are promoting.

You Want To Pay Me How Much? Dance, Teaching, Finances, Opinion

The Story of Sally and the 45 Minute Dance Classes - Dance,Teaching, Opinion